Director of Research at the French National Centre for Research 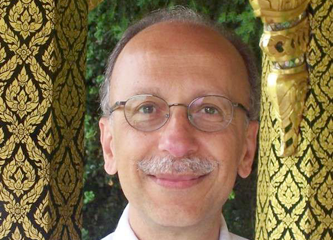 Director of Research at the French National Centre for Research
www.cnrs.fr

Directeur de Recherche at the Centre National de la Recherche Scientifique, and member of the Archives Husserl at Ecole Normale Supérieure, in Paris. He was educated at several universities in Paris, where he received successively his M.D. in 1980, his Ph.D. in Physics in 1985, and his “Habilitation” in Philosophy in 1997.

Later on, he focused on the much-debated connections between the philosophy of quantum mechanics and the philosophy of mind. He published a book on that topic in French in 2000, and worked in close collaboration with Francisco Varela in the wake of this work. He is presently pursuing this line of research by developing a conception of consciousness inspired from neurophenomenology, and an epistemology of first-person knowledge. Besides, he also learnt some Sanskrit in order to get a better understanding of basic texts by Nagarjuna and Candrakirti, and recently published a book (De l’intérieur du monde : pour une philosophie et une science des relations, 2010) in which he draws a parallel between Buddhist Interdependence and non-supervenient relations in quantum physics and the theory of knowledge.

All session by Michel Bitbol

A contemplative point of view on neurosciences